I’ve been visiting Cloud Partners Expo (formerly called the Channel Partners Expo), since 2008. This year my main goal was to understand changes taking place on the supplier side of the market, and choose which product and service offerings will benefit the customers I represent. Here’s what I found. 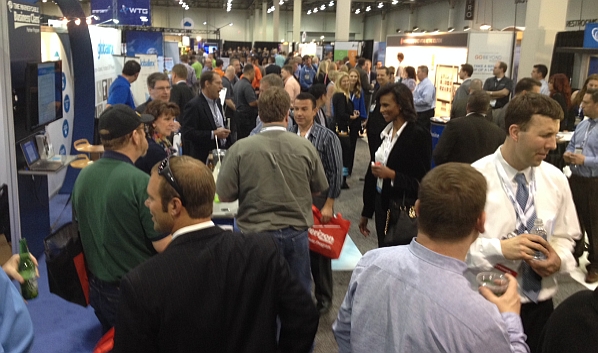 Partners and Providers seek each other.

The products have changed rapidly, but the partners have not.

In 2008, I did not see a single hosted VoIP or cloud provider with a booth at the show. Most of the products and suppliers were legacy: MPLS, conferencing services, fast Ethernet, and traditional voice products like PRIs and POTS. This year, the show was crowded with VoIP and cloud services. Most of the suppliers I was used to seeing were still there, but of course they all have their own versions of cloud offerings as well. I expected that the partners I was familiar with had increased their cloud offerings to keep up with the times. Not so much. One master agency, which does a tremendous amount of business in telecommunications, said that only 10% of their current revenue is cloud services, while the other 90% is legacy. While that figure is rising and will continue to do so, it has not kept pace with the providers that have exploded on the scene.

Why the lag in cloud adoption?

There are two reasons. The first is that many businesses have been reluctant to adopt the new technology, so their consultants continue to sell traditional products. With an “if it’s not broke, don’t fix it” mentality, most medium and larger size businesses are content with the status quo. Also, in larger organizations, political pressures make it more difficult to make decisions.

The second reason is that many of the partners that have been selling legacy products are not used to the complexity that comes with cloud consulting. The divestitures of the telecommunications industry in 1984 and 1996 opened the floodgates for consultants that could spread the gospel of cheaper products like long distance, PRIs, and internet connections. They was no real value proposition between competitors – a PRI from AT&T was no better than a PRI from the local CLEC, so cheaper pricing was king – and it was much easier to sell. In today’s world, the smaller cloud providers need to leverage the channel the same way the CLECs did, but the value proposition is not the same – cheaper does not mean better anymore.  The sale has become more complex.

The real value is a better product, not a cheaper cost.

The past ten years has seen a drop in price for both voice and data products. For voice, the reason is that all carriers have adopted VoIP and have leveraged the efficiencies. For data, the rise of the cable companies has driven legacy internet connection pricing to razor-thin margins. Pricing can’t go any lower without some sacrifice to the customer. Instead of price, value is what companies are seeking in both providers and consultants.

Providers create value by reducing soft costs, such as downtime, problem resolution, scalability, disaster recovery, and the ability of systems and employees to communicate with each other intelligently. Consultants/partners create value by deeply understanding business needs and finding the right technical solution.  Here’s an example – want the cheapest option for VoIP? Try Magic Jack. It will only cost you $20 a year per line. But is that really going to serve your business well? Ultimately, most of the great (and affordable) cloud offerings come from smaller providers.

Legacy services will have value to businesses for years to come. However, the cloud is the future of the telecommunications business. We can see that right in the new name of the conference itself: Cloud Partners. But how do we know which ships will be able to navigate the stormy seas and which will founder in the maelstrom? A wise captain, good compass, and powerful motor will surely be assets in the journey to the new world, where land is open for the taking. Your best bet as a business owner, channel partner, or broker is to spend the effort doing your research now before the storms hit – or, partner with the people that have done it already.